The Best Things in Life are Friends Chapter 11 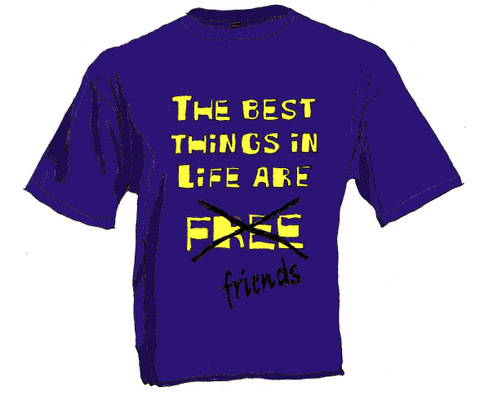 A fine morning in early May and for a change the sun shone out of a cloudless sky. On the sea front, fresh breeze (you could always expect wind of some velocity) lifted and twirled the strings of bunting tied between the ornate, silver-painted Victorian lampposts that lit the Esplanade. Local people were easy to identify, still wearing their thick top coats and scarves, not having yet abandoned their winter routines. Trippers, on the other hand, determined to have ‘a day at the beach’, were simple to spot, dressed in bright, summery frocks or blazers, their children attired in t-shirts and shorts.

Alan, making no concessions to the warmth of the day, wore his dad’s wartime duffel coat, still three sizes too big for him, and his usual denim trousers. Topped off with a black woolly hat, he resembled a badly dressed extra from a film about submarines. Katie wore her navy blue school raincoat, which she did for nine months of the year anyway, it being the only coat she owned apart from an old hooded jumble sale jacket now far too small for her. Already she felt warm and the coat flapped open to reveal patched dungarees (she was a dab hand with a needle and thread) and one of Jess’s fashion-mistake sludge-brown polo neck jumpers. The two had decided they would stick close to one another as they embarked on their summertime mission to earn some decent money and not spend the whole six-week holiday skint and, more importantly to Katie, hungry.

Alan had stuffed his school satchel with zoo leaflets, along with a Tupperware box containing two rounds of peanut butter sandwiches and a bag of crisps each. Katie’s shoulder bag, one of Jess’s lurid floral cast-offs, contained two apples, taken from a lodger’s food cupboard, and two balls of gum from a penny slot machine.

The children had decided on their pitch. They would stand either side of the pavement at a spot not far from the pier entrance. “Fan out the leaflets, like this,” Alan advised, holding five with their titles on show, “then they can see what we’re giving them.”

“Do you think we should say anything?” Katie asked nervously as she fumbled with her clutch of leaflets.

Alan sniffed and looked thoughtful. “I think…” He looked around at the people passing by. A young mum and dad, dressed casually in summer garb, ambled past, swinging a three-year-old between them and chatting happily. “Like those people. They look as if they’re in no real hurry. My rule will be to say something to people like that. I don’t think it would do any harm – might even do some good. Something like, ‘Visit Medgate Zoo, for a grand day out’, something like that.”

“Quite so.” Alan gave a thumbs-up.

The sunshine had lifted everyone’s spirits, as it always does after a spell of bad weather, and the majority of families had accepted the proffered leaflet with interest and a ‘thanks’. At eleven thirty (precisely), the children had a break. All the nearby benches were occupied, so they found a place to rest on the pavement where they would not get their toes walked on. They sat down with their backs propped against a panel advertising the summer season’s entertainment at the Pier Theatre – this year Ken Dodd topped the bill – and ate their snack. The peanut butter sandwich did its work, greatly assisted by Alan’s genius addition of a Kraft Cheese Slice. Katie had also added a layer of crisps to hers and still finished before Alan.

“How many left? Leaflets, that is.”

Alan raked in his satchel. We’ve probably got rid of half, about fifty. I didn’t count them exactly.”

“No, but I had to pack my bag in the shed where I store the leaflets and keep a watch out for Jade. I can’t keep them in the house; she goes through my stuff regularly and would have found them. She won’t go in the shed, though. Spiders.”

“Wonder how the dog walking’s going?” Tom had managed to talk two old gentlemen on his paper round into letting him and Jess walk their dogs while they went off to London for the afternoon.

“We’ll find out tomorrow. Same time, same place, I’m assuming. Dad’s going fishing and taking Jade with him, you’ll be glad to know, so we’ll have the place to ourselves.”

They munched their apples and enjoyed the moment. The town heaved with ‘cockneys’, as the locals branded all Londoners. Evidently, scores of London families had decided to make the most of the spring weather and hop on a train to the coast.

Their snack finished, they stood and brushed themselves down. It was time to get busy. Both children abandoned their coats, draping them over the railing and looping their bag straps to anchor them. Katie looked up and down the promenade. She shielded her eyes and squinted in the direction of the lifeboat station, then tapped Alan on the shoulder. “Look who’s coming,” she giggled, and pointed.

Alan followed her gaze. “Oh my giddy aunt,” he said in wonderment. Jess and Tom were walking towards them, each with a dog on a lead. In front strolled Jess, wearing the tight, blue dress Katie had once watched her mother make for her and that Jess reckoned showed off her figure, such as it was. She walked confidently in a pair of white stilettos she must have borrowed from her mum’s wardrobe, and had on her wide-brimmed straw hat, set at a jaunty angle. Large, black-framed sunglasses completed her ensemble. Alongside her trotted an entirely appropriate, immaculately coiffed miniature white poodle. At last, a film director had cast her in the role she had been waiting her whole life to play, and not a few passers-by gave her a long look, perhaps wondering if she might be someone, a child star off the telly perhaps, that they ought to recognise. If there had existed an edition of Vogue for teenagers, then here surely was the perfect model for a cover shoot.

A few yards behind her, trailed Tom. Dressed in a black polo neck sweater, black trousers and a jean jacket, he could have been off to a job interview for a nightclub bouncer. He also wore sunglasses and his denim John Lennon cap, pulled so far forward over his eyes that, if it hadn’t been for his stocky frame and strutting walk, you might not even have recognised him. You would certainly not have associated him with the dog that trotted at his side – a perky Dachshund that managed to look both dignified and ridiculous at the same time. In stark contrast to the boy who held his lead, the dog looked inordinately pleased to be alive and out in the sunshine.

“How’s it going?” Alan called once the dog walkers had come within hailing distance.

“Hi!” Jess yelled with a grin and an energetic wave that somewhat ruined the erstwhile cool persona. “This is Princess,” she said, indicating the poodle. “And that is Fritz.” She waved her arm towards Tom, who flinched as if someone had slapped him round the face. The sausage dog wagged his skinny tail and gave a yap. Tom sighed. “I seem to have a walk-on part in my own life,” he muttered unhappily.

Hands clasped behind her back, Katie peered up under the brim of Tom’s cap. “And this is Tom, everyone,” she announced to the street and then, in anticipation of a retaliatory hand-grab, stepped smartly away.

Tom, three shades redder than normal, looked the picture of misery. “I’m thinking of the money,” he said through clenched teeth, his face a comic mask of tragedy.

Jess filled the others in on the details. “Their owners have gone off to London for the day. What are their names?”

“Two nice old gentlemen in the Eastleigh Court flats. They’re on his paper round.” She jerked her head in Tom’s direction. “They’re giving us a pound each just to walk them round town until they get back at four. We’re going to meet them off the train.”

“Easy money! Nice one, Tom,” Alan said to cheer his friend up.

Tom huffed wearily. “I said let’s stick to the back streets, round by the gas works or up Honeypot Lane, but oh no. ‘We should go along the prom, give the dogs some sea air’.” Tom mimicked Jess’s singsong voice, which made the others smile.

Katie knelt down and stroked Fritz, then tickled his long ears. He really was a friendly dog. Katie got on with most animals and, although not particularly a doggy person, she imagined that Fritz would make good company.

“If those two ever had puppies I wonder what they’d look like.” Alan said innocently, but Katie could see the shining humour in his eyes.

It was quite a thought, and it triggered a chuckle from Jess, but Tom was not amused. He yanked on Fritz’s lead. “There’ll be none of that nonsense today!” he declared hotly, bristling with moral affront like a scandalised maiden aunt. “Come on,” he said roughly, and began pulling the dog along.

The others nodded. “You’ll have to get one of those t-shirts that says ‘I’M WITH GRUMPY’,” Katie said as she waved her friend off.

“Jess looked amazing,” Alan said matter-of-factly as they resumed their places for another couple of hours of leaflet distribution.

“Yes she did, didn’t she?” Katie replied, but managed to keep any hint of jealousy out of her voice.

Other articles in The Best Things in Life are Friends