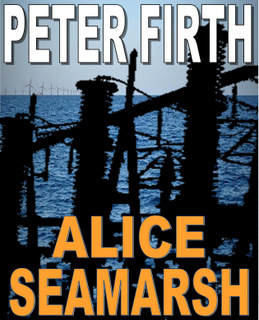 The Great Death happened the year after my birth. Some people call it the Calamity and I’ve even heard it called the Judgement. But the Great Death describes it well enough. It started spreading out from China in the autumn of 2013 and by Christmas, it had infected every part of the world. Nothing could stop it and no one could escape it, or so it seemed. To survive, you had to keep away from it. The old and the young died first, and in cities, it was everyone, more or less. They couldn’t stop the spread. Goodfleet came through it better than most towns. We have the Major to thank for that. Him, and the sea, and of course the marshes.

Alice pulled her toothbrush from the mug beside the basin and noticed it had already been used that morning. Rob, it had to be. She’d shown him endless times how easy it was to make his own yet still he used hers. It was getting annoying.

“They’re back! Vic’s home!” Terry shouted up the stairs, stamping to put on her outdoor shoes.

Alice spat, rinsed, and yelled back, “Are you sure this time? Undo the laces or you’ll break the backs down.”

Alice looked up from her teeth brushing and met, in her father’s old shaving mirror, the bright, round-eyed gaze of a girl, fourteen now, nearly fifteen. Not a woman yet, but not far off. Her hair could best be described as not exactly blonde but not exactly brown, either. It had a tendency to frizz, so she washed it no more often than she had to. During the day, she tied it tightly back in a practical ponytail, which emphasised the roundness of her face, with its small nose and conspicuous cheeks, freckled like hens’ eggs and already tanned, despite it being only mid-May. Her resting face was full-lipped and serious, almost sad; not a pretty face, perhaps, but ‘striking’, as Don always said, possibly even beautiful. However, happiness transformed her. Her broadly set, sea green eyes widened, and her smile, displaying her regular, ivory teeth, generously invited you to ‘smile with me and share in my delight’. A tomboy perhaps (her sparse wardrobe contained not a single dress), but unmistakably all girl.

She stood erect, pulling down her t-shirt and stuffing it into her jeans. Her ponytail had accidentally flopped into the basin and she swished her head from side to side in an effort to stop the water dripping down her back. Dad had been at sea for more than four months, his longest voyage ever. Undoubtedly, he would notice quite a change in his daughter.

At the harbour, a crowd had gathered. People were in high spirits and talked excitedly about the return of a ship that had been thought lost. The last contact with the vessel had been five weeks ago. The ship had sailed close enough now for someone with binoculars to shout confidently, “It’s the Sea Princess all right.”

Twenty riggers and technicians plus a permanent crew of ten had spent the whole spring servicing the Northwick Array, the largest installation of wind turbines in the North Sea, every turbine rigorously maintained in top condition, even though the 180 generators could supply far more electricity than either Northwick or Goodfleet would ever need. But coastal people looked at any gift from the sea as provisional and capricious, liable to be snatched away at any time if not carefully husbanded. Some saw the turbine maintenance as a collective act of faith; someday, that surplus energy would be needed. A time would come when people would at last feel ready to begin dispersing from the safe enclaves that had sustained them through the anxious years since the Great Death.

Alice looked around at the crowd but still there was no sign of Rob. “He’s probably haggling with some stallholder over a piece of halibut,” Terry said happily, and clung tightly to Alice’s arm. “Will Vic bring us something, do you think?”

“Usually does, doesn't he? ’Specially if he’s been over to Holland.” Sometimes, if it had been an unusually long voyage, the ship put in at Rotterdam to refuel. Oil traded for refrigerators. Refurbishing fridges and freezers had become one of Goodfleet’s biggest industries. No, the biggest.

Alice’s older brother, Adam, had worked as an apprentice at the fridge factory since leaving school, learning how to bend metal tubing and repair motors. A handsome boy of eighteen, and the eldest natural child of Marsha and Vic Seamarsh, he enjoyed physical action – rugby, football or going out on a fishing trip with his mates. Never in a million years would he have thought of joining Alice for an afternoon settled in a kitchen armchair with a thick book borrowed from the Library.

The ship had sailed close enough now to make out the faces of some of the men on deck. Alice recognised Jim Stevens and Harry Meadows. They returned the crowd’s waves but did not smile. At last, the Sea Princess pulled alongside the dock. Alice didn’t recognise the dark-skinned man, dressed in a white polo neck jumper, who threw a rope over to a group of men standing below on the quay. They made an instinctive grab for it, securing the first rope and then another to bollards fore and aft. The crowd, which had fallen quiet, surged forward. A grey-haired woman standing near Alice cried out, “Oh, thank God they’re safe!”

Then the deck filled with men. White-uniformed ratings wearing peaked naval hats and carrying automatic weapons emerged from doorways and began to assemble on the foredeck. None of them smiled. The grey-haired woman clutched her mouth. A man shouted in puzzlement “What’s all this, Harry?” A few had realised what they were witnessing, turning to try and push their way back through the crowd, but most just stood and gawped. Alice knew without doubt that she needed to escape from this scene. She heard Terry cry out and realised how tightly their hands were locked together. The mob still pressed forward; it would be impossible to flee now.

The assembled ratings came to attention as three officers, dressed in dark naval uniforms and peaked caps, emerged from the bridge and climbed down a ladder. A winch lowered a gangplank to the dock and the white-jumpered men trotted down to form lines on either side of the walkway. As the three, dark-uniformed men descended to the dock, the ratings once again came to attention, their boot heels clicking noisily, their shining weapons held diagonally across their chests. People began to chatter, their voices urgent and occasionally loud. Then the tallest officer gave a nod to his men. In perfect synchrony, they cocked their weapons. Like a classroom of noisy schoolchildren receiving an unexpected visit from the headteacher, the hubbub once more dwindled into silence.

The three naval officers stood in a line with the tallest and oldest man in the centre. “My name is Commander Savage,” the central figure said to no one in particular. “Who is in charge here?”

The faces in the crowd looked at one other and some muttering broke out, but no one stepped forward.

“I said who’s in charge?” This time nobody could mistake the seriousness of the question. The man looked round at the lines of armed ratings. Each man visibly stiffened and pointed his weapon toward the crowd. “I won’t ask again.”

Someone shouted, “Send for the Major!” A boy Alice recognised as Davey McSweeney stumbled forward, shoved from behind by several of the crowd. Everyone watched as he sprinted down the dock, picked up a bicycle, and cycled unsteadily away into the town. Joe Morris stepped out of the crowd, his face red and sweating. He pulled off his cap and mopped his face before speaking. “He’s gone for the Major, sir. He’s the one in charge, if anyone is. He reports to the governor in Northwick every week, so I suppose you could say he’s in charge, although actually…”

“Shut up!” the tall man barked. “I wish to speak with everyone in one hour, including your Major. Is that understood?” Behind her, Alice could hear someone being sick. The man who appeared to be in charge approached a woman at the front of the crowd. He bent down until their faces almost touched. “Where is your meeting place?” he said slowly.

Mrs Bentley ran a boarding house in Alice’s street, letting out rooms to sailors, and told fortunes around the pubs. “Begging your pardon, sir, but the Town Hall is the largest building in town,” she quacked. “We hold dances there.”

The man smiled bleakly. “Oh do you? Do you really. How nice.” His voice sounded vaguely foreign, like a baddie in one of Don’s old black and white films, but no one could miss the flat vowels and glottal stops of a Wendon man. He lifted his face to address the crowd. “Pass the word,” he yelled. “I expect everyone to be in the Town Hall…” he glanced at his watch, “at two o’clock. And I mean everyone. No exceptions.”

A rat-faced man, standing on a fish box at the back, shouted over the crowd, “But my mother’s bedridden. The doctor says she can’t be moved. She…” His voice died away. He watched as the tall man unholstered his pistol and pointed it towards him. The gasping crowd pushed away from the rat-faced man to leave him standing alone, frozen on his box, his mouth working silently like a landed fish. “No, I, no!” The man raised his arms and held out his hands as if trying to push the bullet away. “I only…”

The day slowed and then stopped. Alice watched the man, his greasy hair long over his collar, his face stubbled and deeply lined. She recognised him from the Saturday market, where he had a soap stall. There remained time to stop this, nothing had happened yet, but there was no time and the gun bang burst like a balloon in her face. The shock wave exploded over the crowd like a wind-slammed door. The day had been freeze-framed and lifted up, only to be set down again exactly as before, except now the scene contained a dying man. Shot through the lung, he gurgled and gasped, spouting a crimson froth as he sank on to his knees, his expression incredulous, his chin and neck drenched with bright red frothy blood. No one moved to help him as he froze in space, then toppled sideways and fell to the ground in a heap, his eyes staring and unfocused.

The tall man lowered his pistol. He glanced over his left shoulder and gestured with his head for a rating to attend his words. “Take ten of these people on board and lock them in the cage.”

He addressed the crowd once more. “If any of my men are stopped from performing their duties, if anyone tries to do anything heroic to disrupt our mission, you will never see these people again. Now, move away from here. Leave the dead man. You have one hour. Now go!”

Other articles in Alice Seamarsh