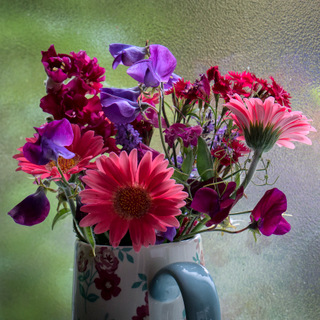 We had a weekend in Cambridgeshire, mid-month.

Saw our sons and partners for a day out in Cambridge Botanic Garden. I used to take my classes there from Ely on the train every summer, splitting the day between there and the Cambridge Buddhist Centre. Perfectly do-able.

At the beginning of the holiday we had to say goodbye to Jack, our dear rescue moggie, who admittedly was pretty ancient. He was a dear, very affectionate but very much his own man.

The garden burgeons. I must stop buying more plants as there is now hardly room to get the car in.

Off to Scotand at the end of the month. One new discovery was Cambo Walled Garden. It's near St Andrews in deepest Fife and has to be probably the best walled garden I've ever visited. the photos appear in a separate posting.

We also went over to Glasgow for the Linda McCartney photo exhibition at Kelvingrove. Nice photos from a time when it was film or nothing. What rather grated were the captions that relentlessly told you how great each image was. I'd rather decide for myself, thanks very much. Another celebrity photographer whose photos I'd love to see in an exhibition is Jeff Bridges. He has been taking photos on film sets for decades.