The Blue Pool - a short story 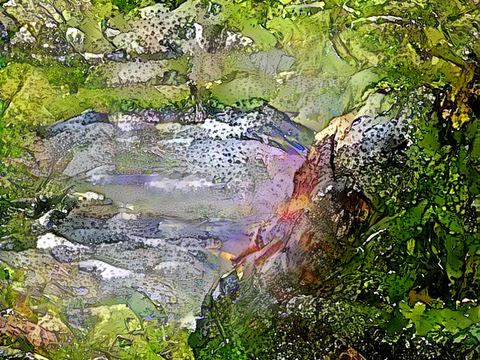 I like spending time at Brad’s house, although I’d never tell him that. His family aren’t rich but they’re not poor either. Like ours, their house is large but badly looked after. You can tell nobody has given a thought to the décor in several decades. Brad’s mum sells her jewellery at boot sales and paints watercolours. Her drawings are brilliant and I’m always at her to give me lessons. “Come in, Amy,” she said. “I’m off to town; help yourself from the kitchen.”

I’ve known Brad since we were small. He’s the nearest thing I have to a best mate. I don’t fancy him like that, but I trust him.

His sister, Rachel, I can take or leave, but there’s one thing you can say about her: she doesn’t spend much time staring at screens, unlike Brad whose eyes are practically square. I never really picked up the screen habit. I begged Grandfather to buy me a phone, but always it was no.

Now I’m glad. I’ve been spared the endless ping-ping, ding-dong of badly written, poorly spelt messages that would inevitably have sucked the marrow from my bones. Who wants to read a bunch of ultra-dull ‘communications’ telling me that Miranda looks ‘gorgeous’ when her digitally distorted face looks like someone who’s been shot multiple times with poison darts? At least with Rachel’s reading obsession you get to choose the worlds you visit.

The three of us had decided to go camping for the weekend, down in the woods. I pushed open his bedroom door to find Brad hunched over his computer. “I’m determined to finish this before we go out,” he said.

“How admirable,” I replied, looking over his shoulder to see a screen crowded with text as he busily tip-tapped more. “This an assignment for school?”

“Yeh. Before we broke up, we watched a film about Vincent Van Gogh. Pretty amazing bloke, actually. Spent a lot of time in fields, painting sunflowers. Completely unappreciated during his lifetime.”

“I can understand why that idea would appeal,” I said drily. “And I know about Van Gogh, lamebrain. There’s a typo, by the way.” I pointed at the text. “’Pure as the driven snot’?”

“Oh, yeh,” Brad chuckled. “That would have been embarrassing.” He pulled off his thick specs and wiped them on his pyjama jacket before tapping in the correction.

I scanned further down the screen. “There’s another. Surely, that bit should read ‘On 27th July 1890, Vincent Van Gogh walked into a wheat field and shot himself.’”

“Christ! Whoops. That would have been even more embarrassing. Cheers.”

“You still up for a swim in the Blue Pool?”

He glanced up from his labours. “Sure. You getting changed here or in the woods?”

“Down there, I thought. Why not? Scared somebody’ll see your puny muscles?”

He pulled a face. “Mum says to be quiet at the Blue Pool. Don’t make too much noise or it could upset the mermen.”

“The mermen?” I scoffed. “Have you completely lost it? Mermen. Next, you’ll have fairies living at the bottom of the garden.”

Brad shrugged. “Actually, I have heard mum talk about seeing small people in the woods, and not children either. So who knows?”

I didn’t answer. I left him to it and flopped on his bed. It smelt like a dog in the back of a hot car. A book lay open face down on the bedside table. Its title, Texas Heatwave, sounded distinctly unpromising. The lurid cover picture depicted a flame-lipped woman with improbably large breasts being held against a rock by two moustachioed dudes wearing big Mexican hats and brandishing pistols. “What’s this about?” I called over.

Brad glanced up. “That? Love, life and lust in the Old West.”

“But mostly lust, right?” Hastily I put it back. I picked up a ball and cup toy that lay on the carpet and spent some time playing with it. Like many physical activities, it was puerile but strangely addictive.

Meanwhile, Brad kept up a line of chat that perfectly matched the intellectual challenge of the toy.

“Dad’s down the beach with his kite, so we can help ourselves to whatever grub we want to take.”

“With his kite? Are you serious? Oh my God. His trainset’s broken, I presume?”

Brad lifted one shoulder. “A man needs an interest, that’s what Dad says.”

Brad ignored me, and after five minutes of cup and ball, I’d had enough. I realised the typing had ceased a while ago, so I got up to check on progress with the life and times of Van Gogh. The last sentence still read ‘Today, Van Gogh’s paintings are considered worthless.’

I glanced at the taskbar. “You toerag! You’ve been playing Monkey Mayhem. Get off that computer now, or I’m going camping without you. And it’s priceless, you clot, not worthless.”

We’d chosen to pitch camp in an unfamiliar part of the forest, but being only a fifteen-minute walk from the house we could always nip home if the water ran out.

“I hope you’re not going to spend the whole time texting your mates,” I said as Brad kicked deer scat off the site he’d chosen to pitch the tent.

“Didn’t even bring a phone,” he replied complacently as he tipped the tent out of its bag.

I was impressed until Rachel brought me back to earth. “He told me it was pointless. You can’t get a signal down here.” Dressed in an oatmeal kiwi shirt and matching skirt, she could have been on safari in Africa. She’d brought a folding chair and now busied herself trying out different places until she’d found one where it didn’t wobble.

Once we’d pitched the tent, Brad and I spent the next hour foraging for dry sticks, just enough for a nice evening fire to fry our sausages and bake our spuds. To no one’s surprise, Rachel announced that she intended to spend the afternoon reading.

We took turns to change inside the tent. “Don’t finish all the crisps,” Brad said, as we set off for the Blue Pool.

Rachel looked up briefly from her book and wrinkled her nose. “Then don’t be more than an hour or I might.”

Whatever the season, Blue Pool is always freezing, but since I’d swum in the lake before I knew what to expect. Rather oddly, the pool had no obvious source or outlet. Close to shore, caused apparently by the permanent suspension of fine clay particles, the water appeared translucently milky, but away from the reedy fringes, the water’s whiteness transformed into an innocent pale blue that offered no clue to the pool’s depth. Around much of the edge, thick beds of reedmace made access to the water all but impossible but, at the northern end, a short jetty projected beyond the reeds. There, I knew the water to be about waist deep. Perfect.

“I will if you will.” Brad kicked off his sandals. The wooden boards beneath our feet were roasting, in contrast to the surrounding water, and I anticipated the chilly sting of first contact. “Best be quiet or we’ll scare all the wildlife,” he added.

I grinned. “The mermen, you mean. OK, so no shouting Geronimo. Just pretend you’re a badger cooling off or something.” Before he could stop me I grabbed his hand. “Ready? One, two, three…”

I surfaced quickly. The pool’s biting cold never failed to surprise and I gasped with the shock. Brad surfaced behind me, wheezing, spluttering and swearing loudly. “Badgers cover your ears,” I laughed.

We needed to swim or we’d freeze. A red-painted buoy, tethered fifty metres out, offered a suitable finishing line for our swim. “I’ll race you,” I said, expecting this to provoke more bad language, and set off at a slowish crawl to allow him to keep up.

The buoy proved too steep-sided to mount, even when Brad allowed me to climb up his back while he held on to one of the grips, so we trod water for a while until we’d recovered our breath. Even out here, the water’s cloudiness made it hard to see down more than a few tens of centimetres.

The surrounding trees dozed in the hot, afternoon sun, the deep silence troubled only by our breathing.

“Nope, but Grandfather might know; the university have been studying it forever. Divers have done searches, looking for the pool’s source, but so far nobody’s found it.”

“That’s a bit spooky. Are there any fish?”

“Oh, yes. Big ones, too.” As if to provide confirmation a large, dark, fishy shape loomed close to the surface, then turned and disappeared back into the murk. “There, what did I tell you? Can you feel one nibbling your toes?” I said, just to wind him up.

Immediately, he gripped a handle and pulled himself up into a ball. Then he saw my face. “You moo! You scared me.”

“I’m not sure I want my toes nibbled, thanks. Let’s head back.”

He let go of the buoy and struck out for the jetty, not even waiting to see if I agreed. Then the most extraordinary thing happened. He let out a small cry of surprise and, with hardly a splash, disappeared under the water. At first, I thought he might be playing a trick to get his own back. I turned, half expecting him to surface behind me, but the flat water gave away nothing.

He had vanished and I was alone. “Brad!” I yelled uselessly. “Brad!”

Then, with relief, I felt two hands grip my waist. You monkey, Brad, I thought, and clutched one of his wrists.

It was not him. It couldn’t be, because this felt like the wrist of a small child. But a child who possessed great strength, and before I could prise the fingers away the hands had tugged me sharply downwards to submerge me, pulling me further and further down until the daylight began to fade and I could no longer hold in my breath. The pressure of the water pushed the air from my lungs and I knew then that I would drown.

At the instant of your death, people say your whole life flashes before your eyes. All except me, it seemed, because I saw nothing; but how could I be thinking this? The chill and the darkness felt real; the tugging hands felt real. This was impossible. I should not be alive.

Time passed (a few seconds? a few minutes?), then the hands slackened their grip and let go. My senses knocked into neutral, suspended between worlds and completely alone, I dissolved and became nothing.

Then, by slow degrees, my surroundings began to feel less cold, while above, a pale blue flicker grew stronger. I was back in my body. Kicking out with all my remaining strength, at last I reached the surface, gasping and coughing, delighted to feel again the sun on my skin. I felt like shouting but could think of nothing to shout and so I trod water and joyfully blew air.

My returning memory burst the bubble of delight in my face as it dawned me that I should not be alone. I shouted Brad’s name to an empty lake. Then, as if in reply, his genial laugh echoed across the water and I turned and there he was, and I waved tearfully at the approaching dinghy.

“What kept you?” Brad chuckled, offering me his hand as the boat drew level. A slight, shorthaired girl dressed in green occupied the stern. Brad pulled me into the boat and tossed me a towel. “Welcome to paradise,” he grinned and nodded towards his companion. “Meet Ladra. She tells me she’s a wood nymph.”

Other articles in Short Stories