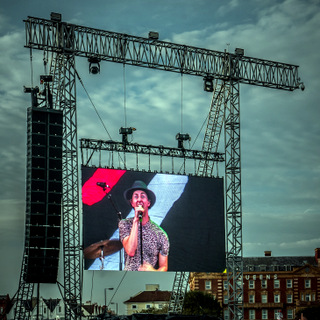 Flogged down to Portsmouth for a late summer music festival. It's nearly as long a journey as Scotland! And it was bank holiday weekend!! But actually, the roads were fine, just long.

Mainly went to see the Stereophonics headline the Saturday night, but also on the bill were Echobelly, The Hunna, Feeder, Maximo Park and jake Bugg. All in all, worth going.

A few pictures if you click the Read more.. 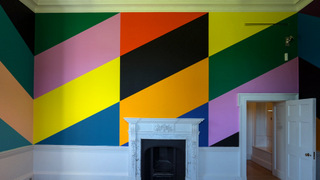 Visited Compton Verney for the third time and , hey! it wasn't raining. There to see the Op Art exhibition 'Seurat to Riley'.

One of the first exhibitions of its kind in the UK, Seurat to Riley: The Art of Perception explores how artists have exploited the ways in which the human eye and mind perceive what we see. Containing over ninety works including painting, sculpture, light works, prints and drawings from public and private collections, the exhibition also features a gallery-sized mural by German abstract artist Lothar Götz (pictured) commissioned by Compton Verney.

The journey begins in the 19th century when artists were eagerly experimenting with the new exciting colour theories of the day. Discover how they began to use colour in ways that simulated our real world experiences, replicating the colours of nature and even movement. Learn how this desire to create art that conjured up the world around us evolved throughout the 20th century to the mesmerising Op art of today. Includes works by twenty three artists including Georges Seurat, M.C. Escher, Josef Albers, Victor Vasarely, Bridget Riley, Peter Sedgley, Daniel Buren, Liz West and more. 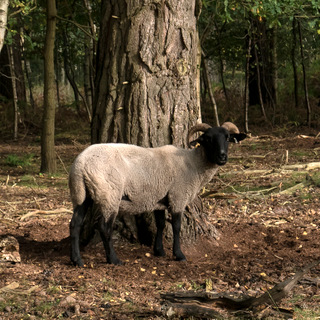 After troughing with family and friends at Jossels restaurant in Market Rasen, visited Linwood Warren nature reserve  on what was a beautiful, early-autumn afternoon. The reserve is right by the racecourse and consists mainly of lowland heath with some ancient oak forest on the periphery.

Familiar as wide, open landscapes peppered with the yellow of gorse and purple of heathers, more than 80% of our lowland heaths have been destroyed since the 19th century.

Even rarer than rainforest, heathland is one of our most threatened habitats. Fortunately, this heath is under the protection and management of the Lincolnshire Wildlife Trust. The site is grazed by a flock of Hebridean sheep (see photos).

Fog on the Humber 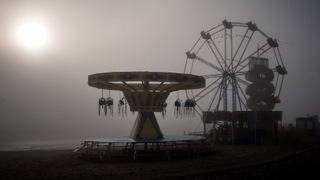 Woke to the sound of multiple foghorns, blaring away somewhere out in the Humber estuary.

I wondered if this was a local phenomenon of if the fog was more general, but apparently it was misty in Lincoln too.

Read more: Fog on the Humber 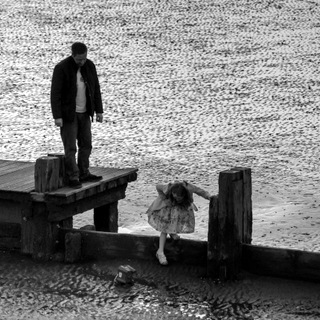 Some images of Cleethorpes taken during August, rendered in black and white.

Most of the photographs were taken using a Panasonic Lumix LX 100. A few were taken with a Sony A850.

The original raw images were processed using Adobe Lightroom 6. In most cases they were just cropped, sharpened and adjusted for brightness and contrast, then converted to mono.

I like to give them a final adjust using Picasa before exporting them at 1800px. 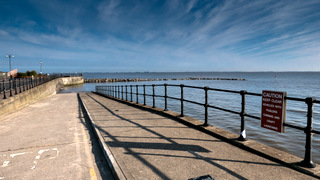 Bags and boxes unpacked, rooms more or less furnished, supermarkets located. From this end of the telescope, moving is a doddle. Just don't ask me to do it again within the next decade, thank you very much.

The nearest beach is about 10 minutes walk. Click the Read more for some recent photos.

I am guessing that the novelty of being able to walk out of the front door and go beachcombing any time I like is going to take a long time to wear off. There's always something to see, something to photograph, even if it's just snapping the guys cleaning the beach, or reading the grafitti scribbled on the sand. 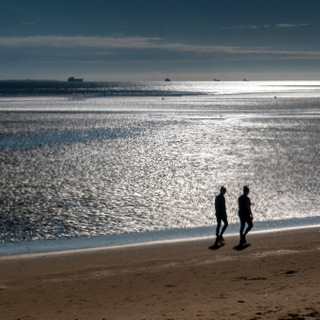 So, Cleethorpes. Different to Ely, that's for sure. Ely has fewer donkeys, for one thing and not many opportunities for crazy golf. Mind you, Cleethorpes has fewer cathedrals.

The night life here is lively, to say the least, but probably not that much different to Market Street on a Friday night, except that here it's every night. I didn't hang around long enought to put it to the test.

Found a nice pub called The No. 1. It's down by the railway station, about a 10 minute walk from the house.

Go out early enough in the morning and the sea front is deserted. Most of these photos were taken before 7am. Click the Read more for an image gallery. 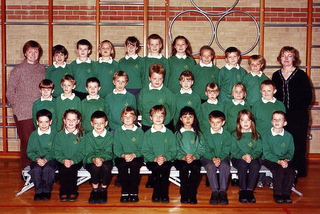 I found this old photo album mouldering in a cupboard at school.

Actually, I found a pile of them, but that's for another time. The one shown here is a set of class photos taken in summer term 2001. The school was a lot smaller then, only about 300 children. KS2 classes were in mixed year groups - I had a Year 3/4 class at the time.

It's great seeing again photos of children who are now all growed up and in their 20s, having finished with formal education and now gone out into the world to seek their fortune..Some might even have left home!

I wouldn't mind betting that not a few of them still live around Ely though, because Ely is that kind of place. Most will be working, with some perhaps paired off or married and starting a family of their own. It would be great if some of them came back to visit the school, to help us celebrate our 25th anniversary. 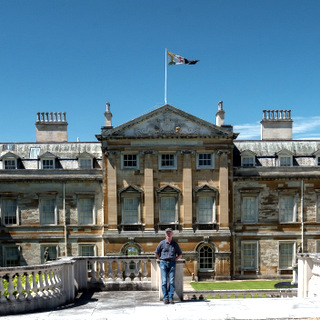 We chose the right day to go.

The weather was glorious, the gardens looked great and, best of all, the place was practically deserted.

Actually, even better than that, if you are a member of the Historic Houses Association (HHA), you get in for nothing!

Click the Read more for an image gallery. The skies look very saturated in the photos, probably because I was using a polarising filter, but they were actually very blue anyway.

We've never actually been inside the house, but we have been told off by an official for standing at the back of the place to have this photo taken. There was a small notice, we discovered afterwards, saying Private, but we hadn't seen it. So naughty!

The cafe's OK and quite reasonable, just don't go expecting a 7-course banquet. We went on a Saturday and there was a wedding on, which meant that a bit of the place was roped off. Whatever. We went for the gardens really, and they are fab. 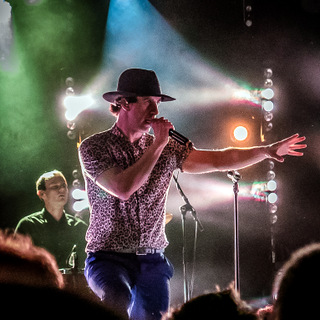 Saw a few bands in May/June, all at the Junction in Cambridge. Maximo Park played songs from their brilliant new albun Risk To Exist plus favourites from their huge back catalogue. Paul Smith was on excellent form. We saw them in Doncaster a few years back but this was a much better gig.

As always,Twin Atlantic were loud and lively. I was fairly close to the mosh pit, taking photos. It was a vision of hell, basically. At one point, Sam McTrusty leapt into the audience and sang as he was carried around by the crowd - at one pointI was nearly garotted by his mic cable. It's the third time we've seen them. Unapologetically full-on Scottish rock.

Talking of Scotland, Justin Currie wowsed a rather sparse crowd with numbers from his new album This Is My Kingdom Now, in my opinion one of his best for a while. Needless to say he also played a goodly number of classic Del Amitri songs. Lost count of the number of times we've seen him perform, and we're going again to see him in Nottingham in October!