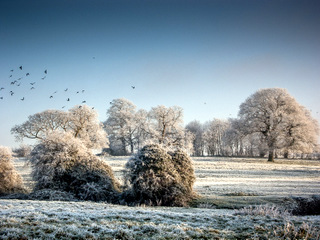 We lived in Sutton-in-the-Isle for 13 years. When we moved to Ely I didn't anticipate how much I would miss walking around the footpaths of that district.

Looking at the photos, we must have had some cold winters ten years ago.

By all accounts, North Fen is about 20ft below sea level, but I don't know if that accounts for the intense frosts we used to get.

Click the Read more for a winter image gallery. 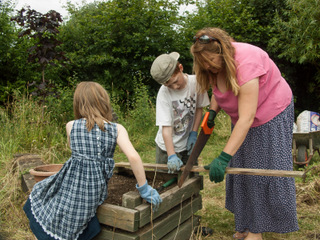 You can really see the garden starting to develop in these pictures.

The border hedge was planted in 2002, when the builders had finished the KS2 extension. The boundary of the garden had to be changed and we lost some ground on the south side but gained some on the north side. We also lost one of the two hillocks. I went with Mrs Draper to Littleport to collect the trees. She had a trailer and we dug up as many trees as would fit - all free. They had been bought for some millenium project that never happened. The only problem was it was July, not ideal for tree planting.. Consequently, I spent half the summer holiday watering the new plants, but it worked, as you can see. Only the oaks died, and that was because I had to cut off their tap root to get then out of the nursery bed.

I have also included some photos from Nature Club, which ran in its original form (i.e. free, just me running it) from 1998 to about 2010. 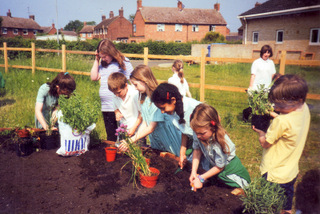 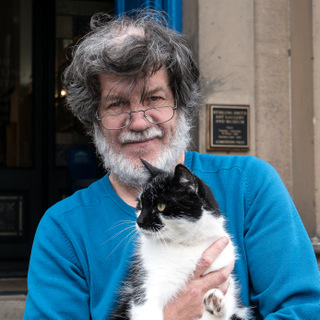 The Stirling Smith is a museum and art gallery in the town of Stirling (durr, where else?).

Like many local museurms it is a treasure trove of curios and unusual artefacts, mostly relating to the hitory of the town. Well worth a visit if you are in the neighbourhood.

More unusual, perhaps, is the fact that the museum has adopted a cat, Oswald. He is black and white and is quite a character. We kept an eye out for him during our visit but with no success. Then on our way out of the building, who should we bump into? The curator was kind enough to scoop up Oswald (who looked more interested in getting inside for a spot of lunch, no doubt, than in talking to us) and letting us pet him.

So, as a consequence, the Stirling Smith gets a 5 star rating from me, anyway!

If you are ever anywhere near Bournemouth, the Russell-Cotes is a must-see.

We visited Bournemouth for a couple of days in half term week. It was our second attempt to get into the place; the first time we tried, in 2016, the museum was shut for the day. Much wailing and gnashing of teeth.

Basically, the museum is a treasure house of Victorian (and early 20th century) art objects - the photographs will give you the idea.

It's a photographer's paradise, and no mistake. Click the Read more for an image gallery.

Ely can be beautiful in any weather.

These pictures were taken early one Sunday morning.

There was absolutely nobody about - just me and the ducks and geese. 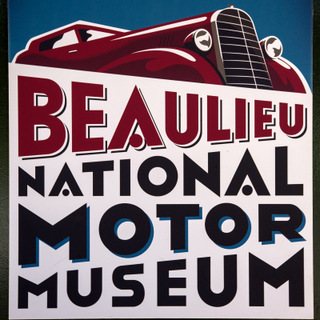 Forget the cars, go for the grounds, the gardens and the lovely house.

There was plenty to see outside even in February.

I really liked the padlock tree sculpture and the Alice in Wonderland topiary - probably even better for photographing had there been a few more visitors around.

The house is one of the cosiest stately homes I've ever been in. It was big without being grand and you could see that it had been a happy family home in its time, for many generations of the Montagues.

The ticket price is steep at £25 but if you are an HHA member it's free! And that's for everything. 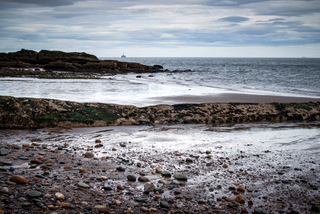 Fife is, in my opinion, one of the most beautiful stretches of British coastline.

Not a bad day for a visit, bearing in mind it's April and it's Scotland. Cool and blowy, so had to keep moving.

The pebbles on the beaches just north of Kirkcaldy are just amazing for their variety. I wanted to fill the car boot but wasn't allowed to. 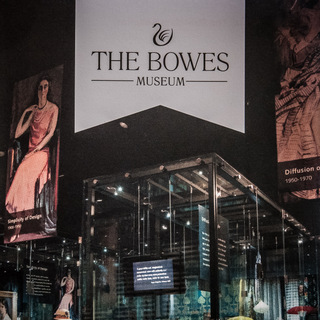 Chances are, you've never been there. The Bowes Museum is off the A66, about 10 miles or so from Scotch Corner (where?). Well worth a detour if you're on your way north (or south).

The museum itself has an interesting history and the contents are world class.

I'll leave you to find out more. 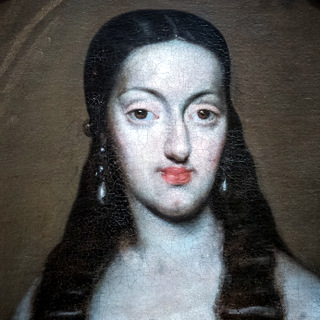 I noticed this intriguing portrait painting while exploring The Bowes Museum last week.

A Google search throws up several more portraits, all rather more flattering than this one.

Her Wikipedia article describes her as 'charming, pretty and graceful'.

Why the strange blue tinge to the skin? It's not just my camera; the painting really did look like that.

I feel there's a story here, worth exploring. And I shall.